Knowledge and Experience to Identify Fakes

A long time ago I learned my first lesson about fakes--the hard way of course.  I was on my first trip to India with a group of women.  We had already visited Delhi, Agra and Kashmir, and were headed to Gulmarg for a hike into the Himalayas.  In the town a friend, Susan, and I ambled in and out of shops.  I was looking at necklaces, and especially wanted to find a bargain in lapis lazuli.   While I had encountered plenty of turquoise on trips to Arizona as a child, I had very little experience up close with lapis.  The shops did indeed display the blue stone, and we enjoyed looking at it, but the prices were high.  Outside, a street vendor had a small display, and there I spotted the stone I was looking for.  He told me it was lapis and we determined that it was a bargain.  I bought the beads, very pleased to be able to bring home the deep blue stone prized by Nefertiti and Cleopatra.
Some days later, I showed my strand to another shop keeper.  “You were cheated” he said.  My eyes widened and I said nothing.  I knew it was very possible I had been swindled because I had been impulsive.  “See,” he said.  And he took a cloth and rubbed my blue beads.  I watched the cloth become blue and the beads become white.  Oh it’s lapis,” he explained to me, “but it’s very bad lapis, and they colored it.”
That was over twenty-five years ago, and I still have some of those beads.  I am very fond of them.  It was not a terribly expensive way to learn about fakes.  Now I know that there are a LOT of fakes out there.
First and foremost there is fake amber (see blog post, “Let’s Talk about Amber”).  In the case of amber, the antique fake amber, indeed early Bakelite, is valuable and expensive in its own right.  Most the red coral nowadays is dyed.  On the street they will tell you that it’s coral, and it probably is.  It just isn’t naturally the red coral that is appears to be.  Silver, especially silver from the developing world, often has a very low silver content.  Jet, the black organic material, made popular by Queen Victoria, is often substituted by black glass.  There are chevron beads from the 14th century and there are chevrons newly made from India.  I have collected some old glass in Africa which is meant to pass as old carnelian stones.
Often it is easy to know the difference by recognizing the prefix.  French jet is black glass; Whitby jet is the real deal.  Sterling silver is 9.25 silver; German silver has a very low silver content.  African amber is plastic, Baltic amber is 50 million year old resin.  But, as in many things, knowledge and experience are the best guides.  Looking back, my dyed lapis  had a lot of value.
Posted by maureen at 7:23 AM No comments:

Looking Out the Window in Late March

As I sit here, working on a new necklace—a short one of natural orange spondylus shell, I can’t help turning toward the window.  It’s bright out there.  The snow has all but disappeared, though large patches still linger even in late March.  But I can finally see my raised beds.And being able to see them naturally leads me to realize that it’s time, or even past time, to get serious about what’s going in them.   Except for the asparagus bed, I try to “rotate my crops” (and we are talking about five 8x4 boxes) every year.
Greens, meaning lettuce, spinach and arugula are givens.  So are tomatoes.  Last year I grew fingerling potatoes, and tried kale and chard.  I also had success with beets and carrots.  And I am very proud to announce that I grew my own garlic for the entire year.  Some things I grow simply because they are fun and beautiful.  Those are pole beans, scarlet runners, sunflowers, morning glories and edible flowers.  They stay.  I may trade beets for onions because I don’t really eat many beets.  Last year I tried  magda squash for cousa mahshi  (a Middle Eastern stuffed squash recipe,) but I put them in a spot that turned out to be too wet.  Consequently I will have to decide whether to move them or do something else.
Gardening is my latest adaptation.  All my life I have had to adapt to my environment.  I moved from home in California, to the East (Boston),  to the Middle East, , to Southeast Asia, to South America, to here in the Northeast.  So I have changed languages, climates, religions, food and general lifestyle every  five or six years.  Here, in Maine, people garden.  And they don’t just garden, they GARDEN.  It’s serious.  In California, where everything grows all year long, people just plunk in their plants, build patios and pathways, and that’s it.  But here, one has to know one’s micro-climates all over the garden,  take soil tests, amend the soil, plan a color scheme for the May and June  “show”, the midsummer “show”, and the fall “show”.  (They are really called shows; I didn’t make that up.) The heights and bloom- times are all calculated in.  People go on Garden Walks all summer long and several groups put them on.  I found that I was so hopelessly behind in what obviously appeals to me very much, that I signed up for the Master Gardener course within a few years of moving here. 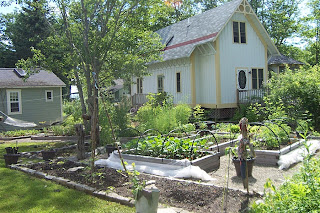 But of course there is always balance.  My California sisters don’t even know what a soil test is, and they just go to the nursery to buy yellow flowers to compliment the house, while I am studying my books, and poring through seed catalogs and trying write, produce and direct a Three Act play  in my garden.  There is a tradeoff:  Come about November, I’m inside making soup and reading novels, while they are out mowing the lawn, which grows fast, twelve months a year.
Posted by maureen at 10:24 AM No comments:

This necklace is called "Mixed Message" 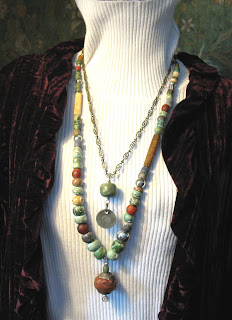 Every year Senior College and the University of Maine Hutchinson Center sponsor the Festival of Art.  It is a venue where artists 50 years old , amateur and profession, may exhibit their work.  I participate every year and have just finished working on my entry--Mixed Message.  I always have a name for my necklaces, and this show finally gives me a chance to follow through with that concept.  The necklace above comprises ancient spondylus shell beads from Peru, an old agate bead with silver caps  (which has obviously traveled from India and the Middle East), glass trade beads made in Italy and destined for Africa, old Bedouin chain from Jordan, ancient turquoise from Venezuela, and spectacular two- hundred year old white hearts from Niger.  The style is reminiscent of old silver Bedouin jewelry.  So this necklace has no real identity; it is a "mixed message".

While designing this piece I heard a tango melody on the radio.  Immediately I went to the computer to play one of my very favorite video clips--the tango scene from "Scent of a Woman" with Al Pacino.  I love it.  It's romantic, beautiful , lyrical,  and emotional.  It just carries you away to the very best place.     Try it: