These are called wedding cake beads.  They are Venetian lamp-wound floral decorated beads from about 1880-1920.  While so many Venetian beads were made for the African trade, these were primarily made for English and American ladies.

Glass beads are either wound or drawn.  Winding is the oldest method; hot glass is wound around a shaft of some kind.  Furnace-winding is done by thrusting a rod into hot glass which is inside the furnace.  The bead is formed in the furnace and then finished outside.  Lamp-winding begins with semi-finished glass canes.  The worker has a fire source in front of him and works the cane from its rod by winding it onto a wire.  He uses a paddle to further shape it.  The artist can continue to decorate the bead by adding glass in a swirling, or combed or feather design  These beads were never painted.

This necklace is 38 inches long.  I found a short necklace, 18 inches, in a junk market in a suburb of Lima, Peru in the mid 90's.  They were lovely so I purchased them for a good price.  Then, ten years later, I spotted a necklace on ebay featuring the same beads.  This time the price wasn't quite as good, but I obtained them in order to make the long piece in the picture.  While the necklace comprises beads purchased on two continents ten years apart, it is not as astonishing as it seems. The Venetians marketed their beads on cards, as if they were buttons, and they went out all over the western world.  Being as beautiful as they are, and immortalized by John Ruskin in his essay," The Beads of Venice" it makes sense that they would be retrievable by the persistent collector. 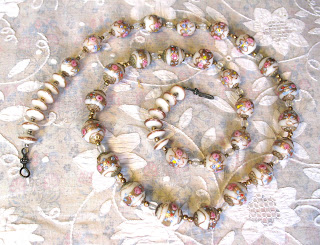 Jane Eyre at the Strand

Saturday night I went to see Jane Eyre at our wonderful Strand theater in Rockland, Maine.    Like so many others, I have seen several Jane Eyres, and, like so many others, the novel is imprinted on my soul. We probably all wonder why we go, since we know the story by heart.  I guess it's a pilgrimage of sorts; we must go.  And I guess the movie producers know that we will.

When I first read the book, I was a young adolescent.  Though I loved it I couldn't wrap my head around some of the features.  Why was Helen Burns in  a Gothic romance? How could Jane love a man who was bad tempered and hard to figure out? He suddenly appeared, then he disappeared. Why did he flirt with a frivolous society belle when he professed to really love Jane?   What about that telepathy?

This movie  got Mr. Rochester right.  Needless to say many of his idiosyncracies were Charlotte Bronte's rather clumsy way of moving her story forward (and it feels like blasphemy to write that).  But in this rendering he looked, sounded and acted in a way that was true to the book, and believable .  Mrs. Reed, Helen, Mrs. Fairfax, Mason, Bertha--the casting was right on.

Some felt it was a little much, heavy in melodrama and sepia, candle lit scenes.  But it was true to the essence of the book.  I just had a jolt when suddenly I saw Billy Elliot pretending to be the zealot St. John.

A True Story about an Untrue Trade Route

There are some very scholarly books written about beads, and the history of beads.  Two that I recommend are, The History of Beads (Lois Sherr Dubin),   and, Collectible Beads (Robert K. Liu).    In The History of Beads, the author details trade routes and travels of beads around the globe in every chapter.  This explains similarities and differences one can see in beads found in different areas.  Within the Middle East I witnessed first-hand subtle differences and similarities of silver Bedouin beads.  But as painstaking as the research has been, it can’t be exact.  I have an amusing true story to prove my point.
Before I started designing jewelry, I collected it.  The souks of Jordan and Oman, and markets in Sri Lanka and India, provided tremendous pleasure in The Hunt.  I had a budget of $100 in those days and had a great time exploring and bargaining.  In 1995 we moved to Peru.  I was expecting to delight in the treasure trove of old Peruvian pieces, but found myself stymied.  The markets sold cheap ceramic beads, and the finer stores sold worked sterling silver, which were not to my taste.  There was one Peruvian woman who did design the type of jewelry that appealed to me.  I visited her shop and was delighted to see her stone beaded necklaces that incorporated antique pieces.  The problem was her prices.  They cost way beyond my $100 limit.  I eventually bought one piece from her, and visited her shows so that soon we knew each other.
After a time, I decided that “Hey I can do this myself!”  I gathered up my loose Bedouin silver beads, broke up an amber necklace, found some dental floss and a needle, and on one cold dark day in Lima, strung my first necklace.
Then  there was no stopping me.  I  quickly found Julio (see blog post 12/7/10) -- or rather he found me--and then found Peruvian silver smiths to reproduce my Omani and Sri Lankan silver beads.  Soon I was selling my designs in order to finance more beads.

At a craft show at the American Embassy, this same designer, who had shops in France, Germany and New York, came by my booth, looked, and then left.  A little while later, one of her shop girls left their booth, came by and flattered me, saying that her boss really admired my work and wanted to buy one.  That was odd.  Though she designed lovely work, I had never seen her wearing a necklace.  I sensed something was up.  “Oh no," I said, “She is the Master.  Why would she want one of my necklaces?”  But what could I do?  She bought a large quartz and silver piece. Naturally I was suspicious.

Then about six months later it became clear.  Some friends and I saw her brochure which was going to Germany. On the front was a necklace with lovely antique  hand cut sodalite, and my (copied) silver Omani beads.  The caption read:  "Pre-Columbian silver and stone designs".

One of my thoughts was, “Imagine how excited a bead sociologist would be to see this.  He will think he has discovered a whole new chapter in the history of trade and migration.”  You can imagine one of my other thoughts…
Posted by maureen at 8:12 AM No comments:

When Americans think about a vacation spot, Sri Lanka doesn't come to mind.  First of all, it's far away.  But so is Australia, and plenty of folks have it on their wish lists.  Then there is that long bloody civil  war which would discourage anybody.  However, it didn't really discourage Europeans during all those years.  In fact, Sri lanka was a top destination for them throughout that period.

Our family lived there for five years, and the way I always describe it is that it's a cross between Hawaii and India.  It has fabulous beaches and tropical weather, which is not India's draw.  And, it has a rich and fascinating cultural history, which is not why people flock to Hawaii.  This is a small island country that contains four religious groups--Christian, Muslim, Hindu, and Buddhist. And there was an advanced civilization there in 6000 BC, of which there are still traces for anybody who is sunburned, and bored of the fun-in-the-sun- beach- life, to go see.

Ceylon, as it was known before 1970, was colonized by the Portuguese, the Dutch, and the British until 1948.  While the Prime Minister , Senanayake, tiptoed around the issue of a national language, English, the colonial language was used in the schools, as a common language.  In 1970, Bandanaraike, a Sinhalese  Buddhist, became the Prime Minister, declared Sri Lanka  a free republic, and took great pains to establish Sinhalese as the national language.  This immediately disenfranchised the Tamil (largely Hindu) population. Their children could not cope with the Sinhala texts in school, and subsequently lost out on good jobs.  This is a classic example of a language issue preceding a civil war.  English, though a symbol of the yoke of colonialism, kept the economic playing field level.  Tamils would speak Tamil and English, and the Sinhalese would speak Sinhalese and English.  Only with the intoxicating declaration of nationalism, and the symbolic hoisting of the en-slavers'  language, did Sri Lanka start down the path of civil war. 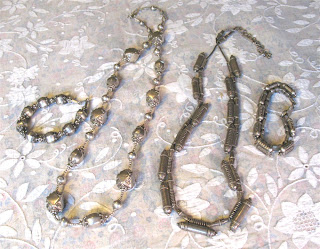 Above are two necklaces from Sri Lanka .  The one on the left features Sinhalese beads, and the one on the right was sold as a Tamil piece, though is has strong Islamic influence with its Hirz boxes.

Posted by maureen at 1:02 PM No comments: