A good life versus the good life

I live in a small town here in mid coast Maine.  Many of the cliches about small towns hold true.  Everybody does seem to know everybody’s business.  But the simple solution to that is to live an exemplary life.

My children hated it when I said, every now and then that, “life is tedious”.  It’s a phrase I picked up from my parents.  I agree that it sounds negative, but I don’t mean it at all in a negative way.  What I mean is that a good life is one where you put in the day in and day out all the way through.   Little kids can be such work, and require patience; they get up early seven days a week, they have tantrums and colds and need to be disciplined and loved.  Marriages have their ebbs and flows.  Jobs aren’t always stimulating and rewarding.  But there is nobility in the perseverance.  It’s a lesson I learned in Jordan when I was teaching for the Jordanian Tennis Federation.  I was a 28 year old American female, facing off with ten middle aged Arab males.  Naturally we disagreed on some points.  But I told myself that no matter what, I would not quit.  They couldn’t drive me out.  “Winning” became simply staying in the game. 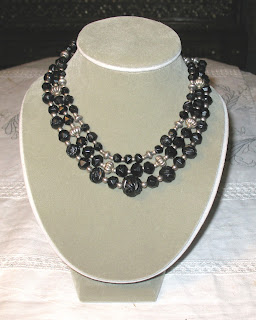 My friend passed away too early; that is for sure.  Yet, her life was celebrated by the town, and her good life made an impact.  Her family and friends will always remember her as the wonderful woman that she was.


This necklace is made of Whitby Jet.  These are antique beads, hand carved in England.  Queen Victoria made jet famous when she wore it exclusively after her beloved Albert died.  Whitby Jet is an organic material, related to coal.  It can be carved and polished to a shiny luster.  French Jet isn’t really jet; it’s glass.  But as jet became fashionable, the black glass beads became popular as well.

This is beautiful, Mom. Thank you. And yes, I still think maybe we can come up with a different word than tedious . . . :)

A pleasure to read..simply and eloquently stated. I can't imagine using any other word except "tedious", Heidi. It wouldn't have the same deep echoes in the minds of us related folk as tedious has. Thanks for the inspiration, Maureen, to perservere "in spite of it all" in some things going on in my life..